Winter 2022 Activism in the Archives

Compelling Question: Why is activism important in bringing about social change?

Activism in the Archives PDF

Activism has always been necessary to bring about real and lasting changes in society. The story of activists and social movements is not always well documented. However, government records created in the everyday work of government agencies often reveals the history and perspective of the individuals involved in those movements. The history of social movements can also be seen in the publications produced by those movements to promote their cause and gain support.

The Winter 2022 issue of New York Archives magazine features two articles focused on activism and social movements in New York State and across the United States. In "This Brain Had a Mouth," James Odato writes about the life and legacy of Lucy Gwin, the disability rights activist and founder of Mouth magazine. Gwin dedicated her life to advocacy after suffering a traumatic brain injury in a car accident and experiencing unacceptable treatment at a rehabilitation facility in Cortland, New York. She brought about significant changes to disability policies through her work as an activist and publisher.

"Investigating Subversives" sheds light on the New York State Non-Criminal Investigation Case Files from the 1960s and 1970s. Seth Kershner details the activities of various government agencies and provides readers with an overview of the types of valuable primary sources that can be found in this collection. The New York State Police actively spied on students and other non-violent protesters through informants and the collection of social movement publications. These primary sources tell the story of anti-war protesters and other activists during this turbulent time in American history. 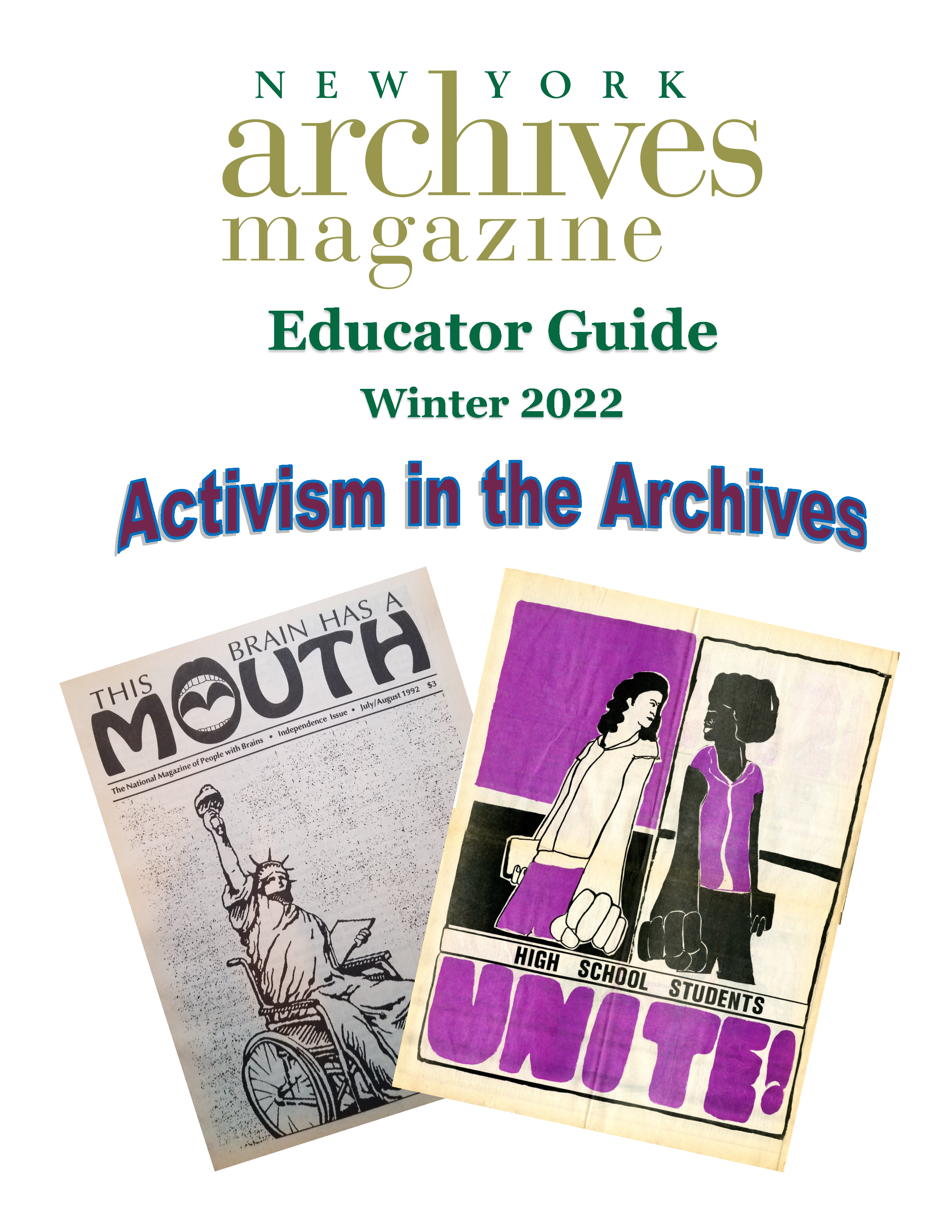 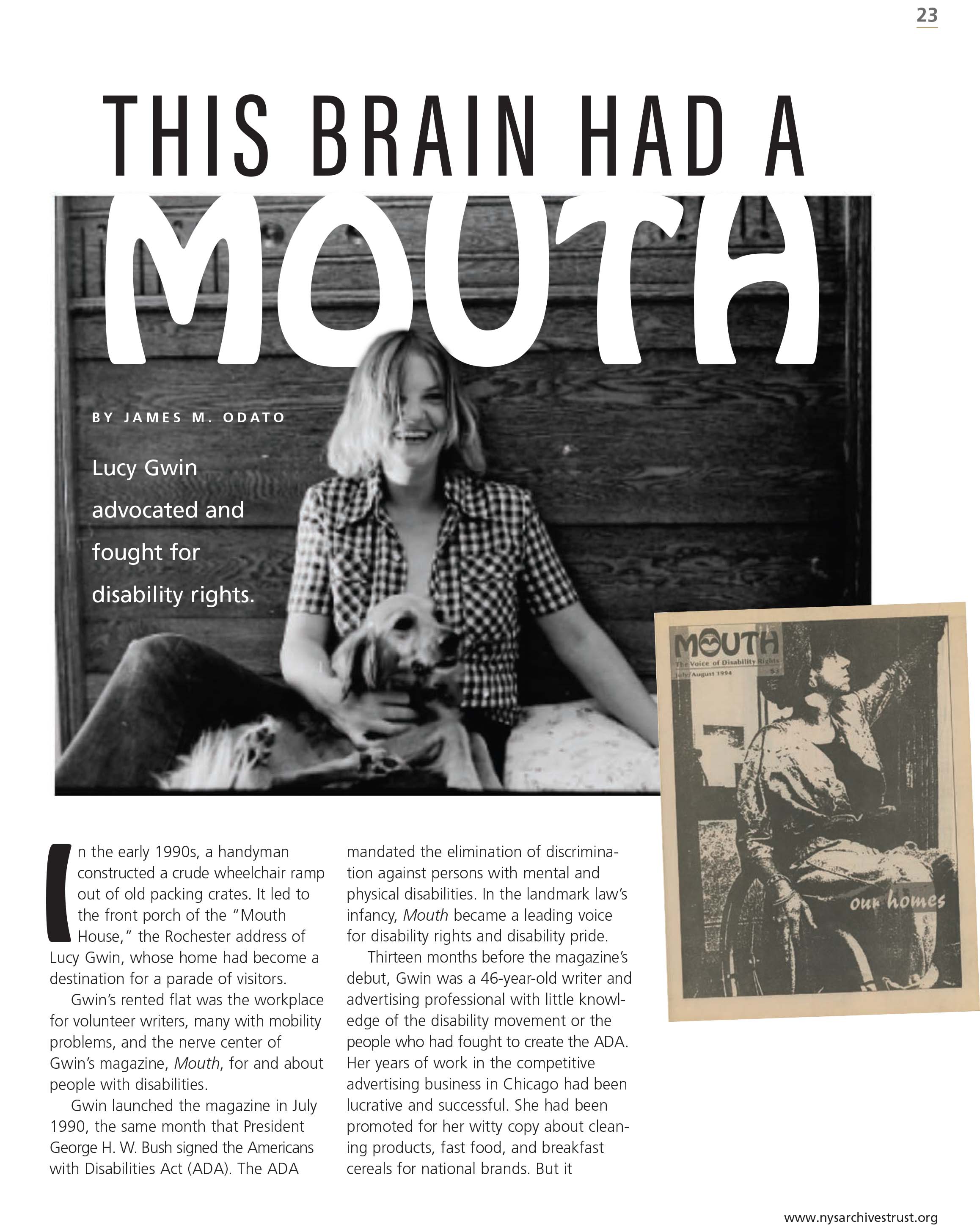 Guided Reading Question for  "This Brain Had a Mouth"
Click here for pdf of the full article.

1. Lucy Gwin's home was the nerve center for what publication?

3. What was Gwin's career before she started the magazine?

5. What was the focus of Gwin's magazine?

6. How did Lucy describe her treatment for her brain injury?

7. What happened to the facility where she was treated as a result of her activism?

8. What did Lucy Gwin do that made her a leading voice for disability rights?

9. Why did Gwin's apartment become known as Mouth House and what role did it play in the disability rights movement?

10. What was the main theme of every issue of Mouth magazine?

11. What role did cartoons play in the magazine?

12. Even though it is not longer in publication, how does Mouth still serve members of the community?

Discussion Questions for "This Brain Had a Mouth"

1. Why was Lucy Gwin so effective as a leader for the disability rights movement?

2. Why are activists important in bringing about social and political change?

3. What issues are important to you? What ideas do you have for influencing those issues after reading Lucy Gwin’s story?

4. How does Lucy Gwin's story show the importance of activism in bringing about social change?

Guided Reading Questions for "Investigating Subversives"
Click here for a pdf of the full article.

1. What happened to the information obtained from the "interview" of student protesters at Syracuse University in 1965?

2. What was the NYS Police trying to maintain through these surveillance efforts?

4. What was the job of the Bureau of Criminal Investigation?

5. Using context clues from the article, what do you think the word "subversive" means? What was the job of the New York Factory Commission?

6. Where did the BCI maintain a "sprawling informant network?"

7. What made many agencies destroy their intelligence files in the 1970s?

8. How were the NYS Police and the NYPD records pertaining to subversives saved from destruction?

9. What do the Non-Criminal Investigation Case Files offer historians of the 1960s and 1970s?

10. How did the BCI investigators act as "accidental archivists?" What federal law currently governs worker safety?

11. What does involvement in protests by community college students tell us about the types of individual who protested the war?

12. What perspectives do you think are present in documents found in the Non-Criminal Investigation Case Files from the 1960s and 1970s? 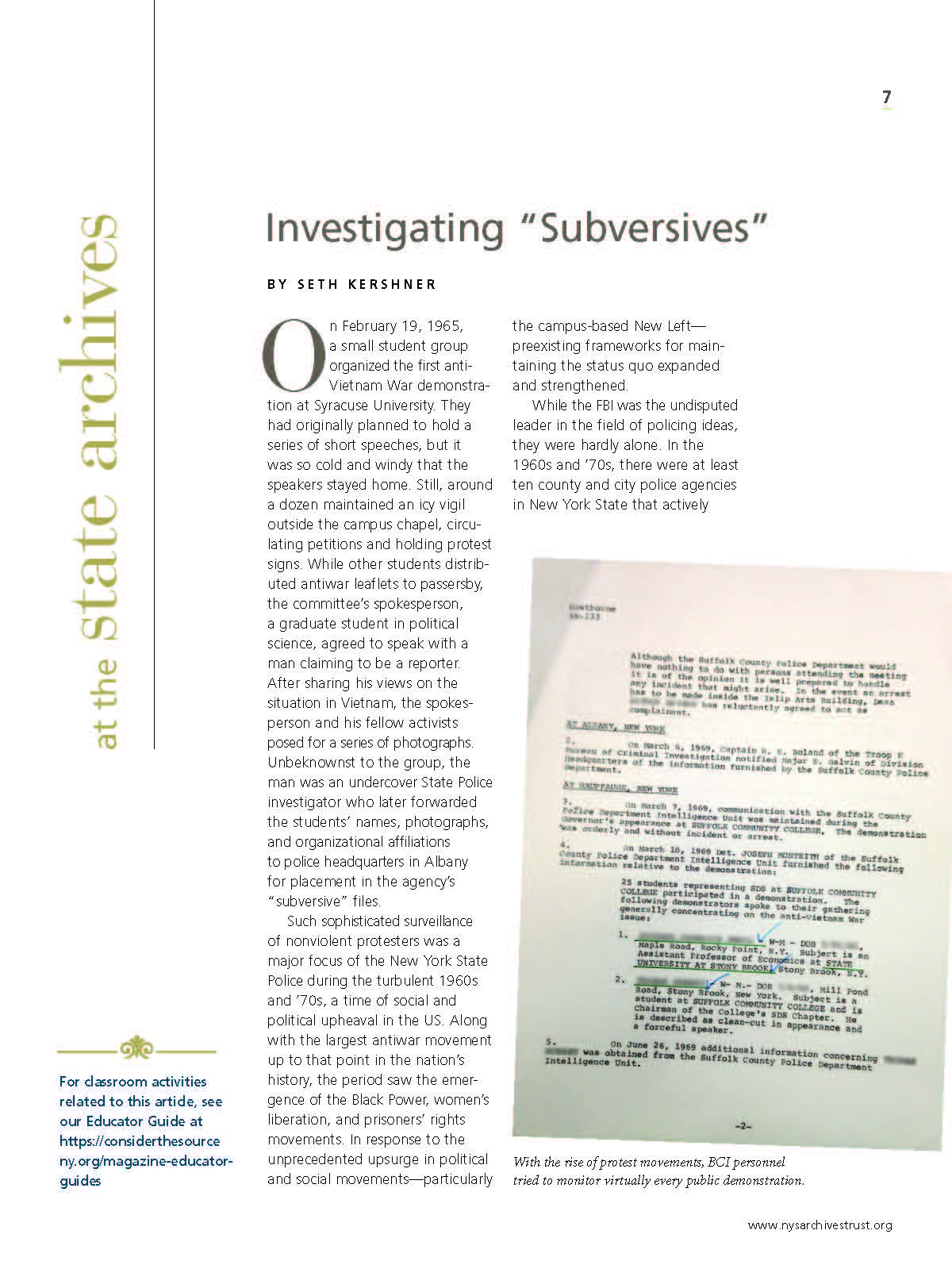 1. Why do you think the government was so interested in spying on “non-criminals?”

2. Were those identified at “subversives” breaking the law?

3. Why do you think agencies destroyed their files when citizens started to bring lawsuits against them? 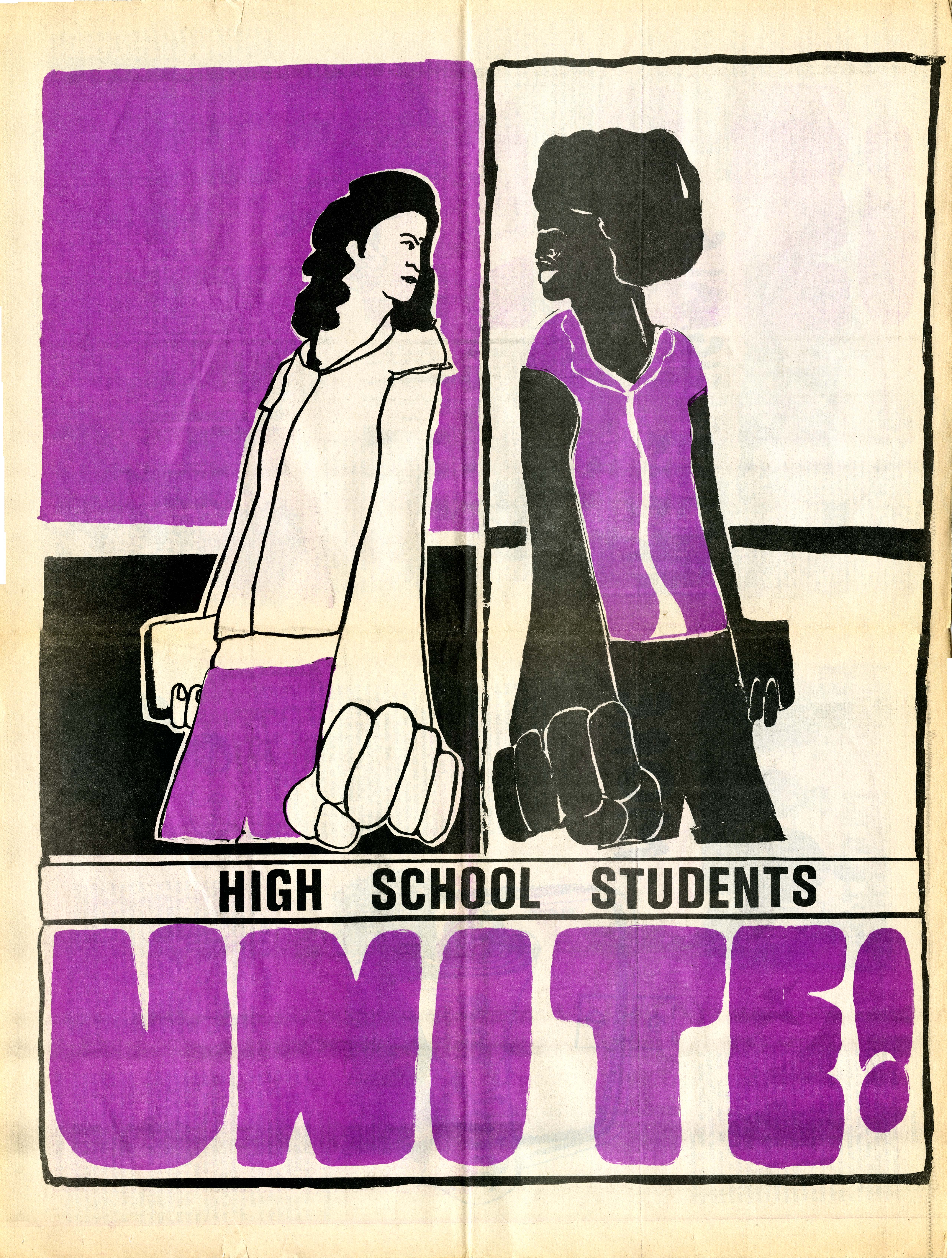 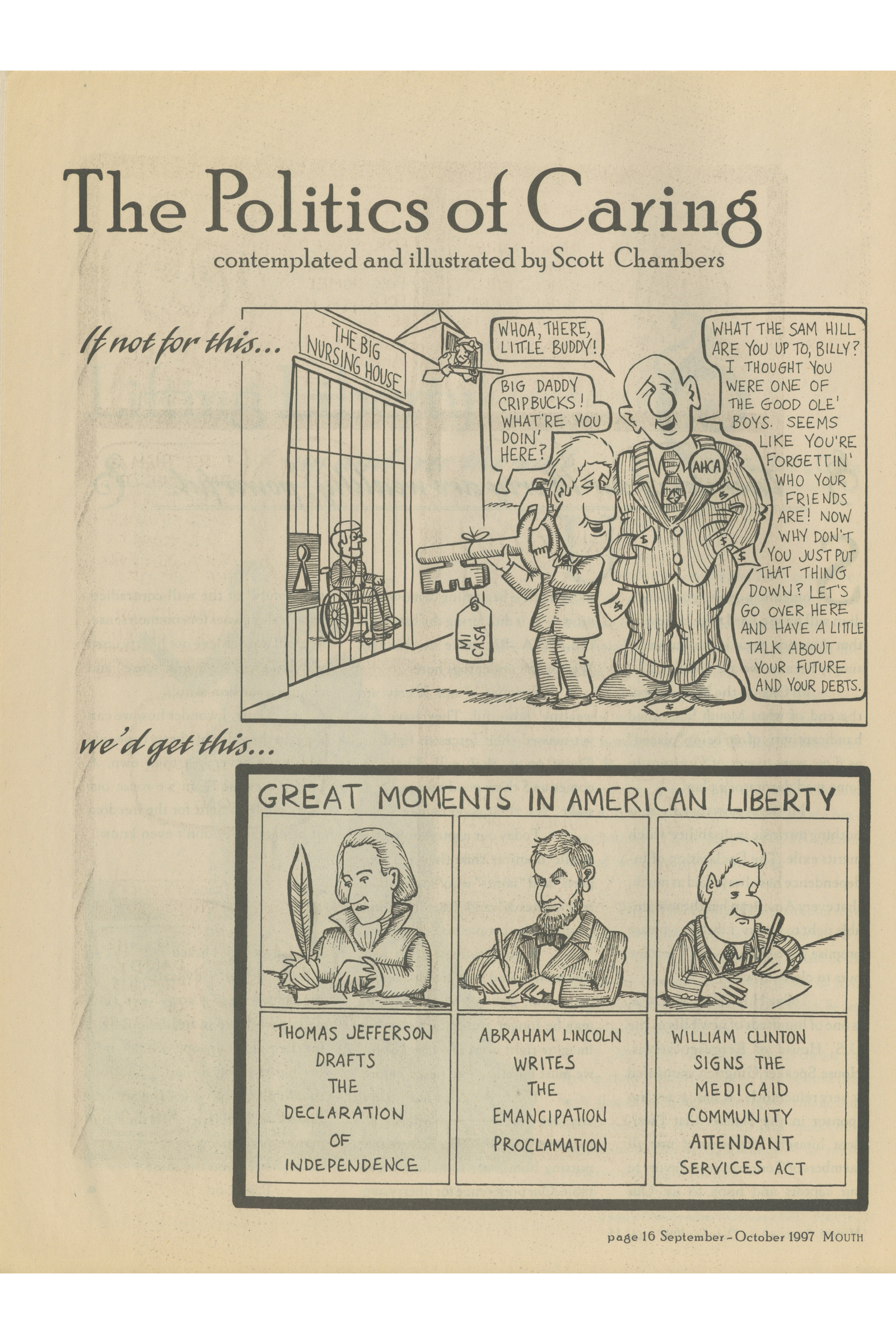 The Politics of Caring 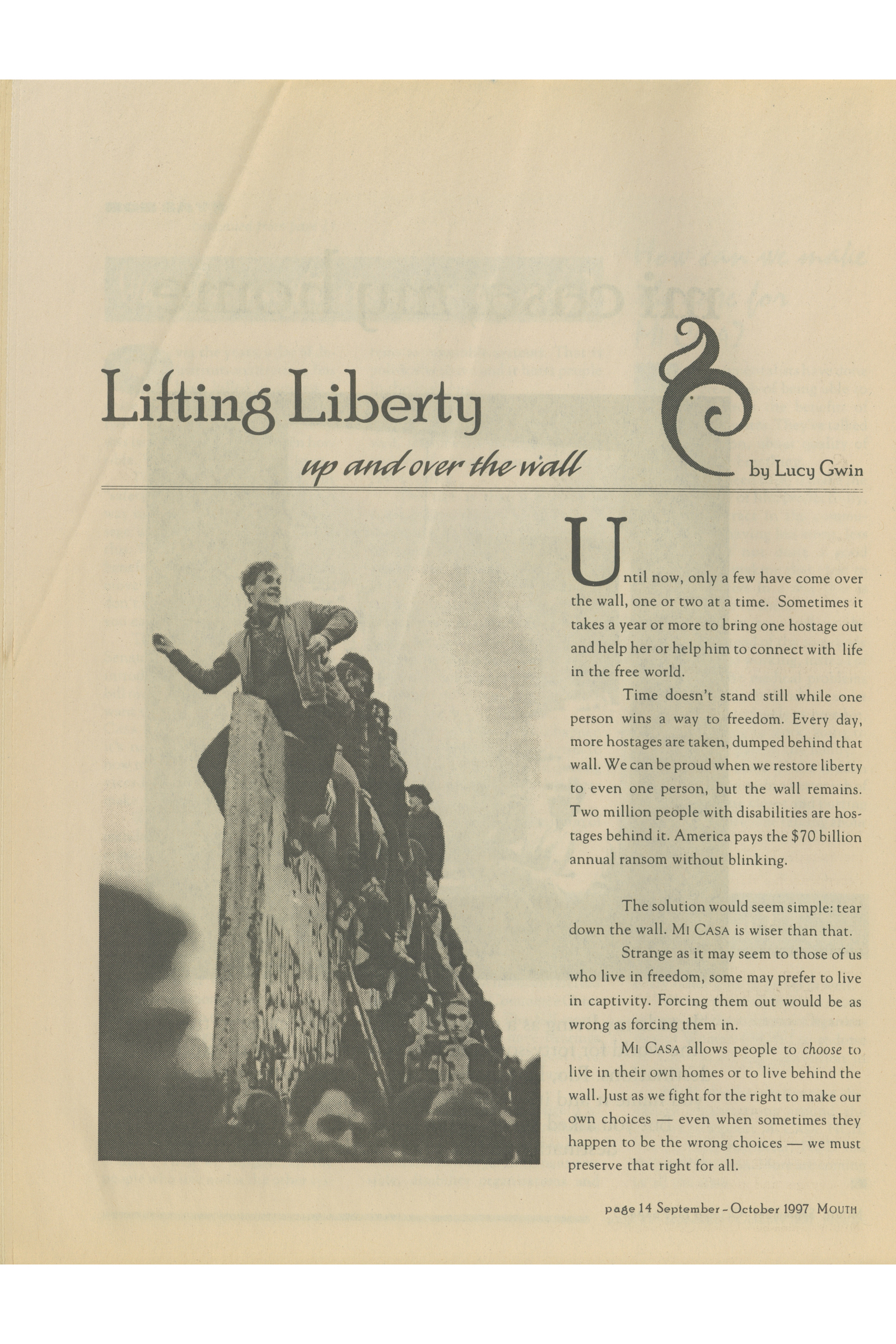