Chinese immigrants appear to have begun settling in the Buffalo area during the late 1800s. A Buffalo Courier news article from October 19, 1902 tells the story of Num Hule, who had adopted the Americanized name of "Jim Lee." He arrived in San Francisco, California in 1874, and eventually began to migrate eastward, arriving in Buffalo in 1891. The first Chinese residents of Buffalo were men who established Chinese laundries and restaurants. According to the Courier article, however, by 1902 the Chinese population had decreased from 140 to 76. U.S. laws that severely limited Chinese immigration (called Exclusion Laws) and discrimination most likely contributed to the small population in the early 1900s.

A January 18, 1902 edition of the Buffalo Times mentioned that there were about 40 Chinese laundries in Cold Spring, Black Rock, South and East Buffalo. Chinese restaurants were located on Michigan Street, Broadway, Oak Street, and William Street. The Tai Gum & Co. store on Michigan Street carried Chinese merchandise, including ivory and bone carvings; and a few doors down a Chinese grocery store provided familiar ethnic foods for the immigrants. A Chinese drug store, owned by Quong Sing Lung, was also established in 1904.

Immigrants: People who come into a country as settlers.
Americanized: Made to become more American in appearance or character. During the first half of the 20th century, an organized effort was made to help new immigrants become "American" in culture and appearance.
Migrate: To move from one place to another.
Exclusion Laws: Laws enacted in the U.S. between 1882 and 1943 that limited or prevented Chinese immigration into the country.
Discrimination: Unfair or intolerant actions towards a group of people,
usually based on prejudiced beliefs.
Ethnic: Relating to the culture of a specific group or race of people. 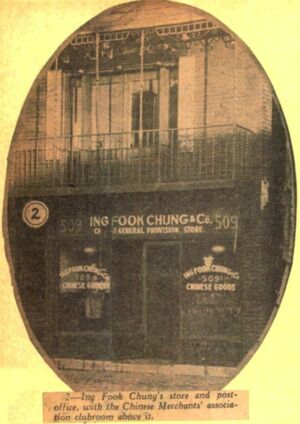 During the 1950s a Chinese Club was formed, and members met regularly at the International Institute. During the late 1960s, a Chinese school met on Sundays at the Trinity Methodist Church in Amherst. The group met for a few years, but discontinued due to a lack of members. In 1981, a new Chinese School was established, at first connected with the Chinese Christian Church. The Church had begun as a Bible study group in 1978.

The Chinese Club of Western New York (CCWNY) was formally established as a tax-exempt organization in 1988. The Club began a second Chinese School in 1986, because the community need for children to learn Chinese writing and culture had grown so large the church building could no longer house them. 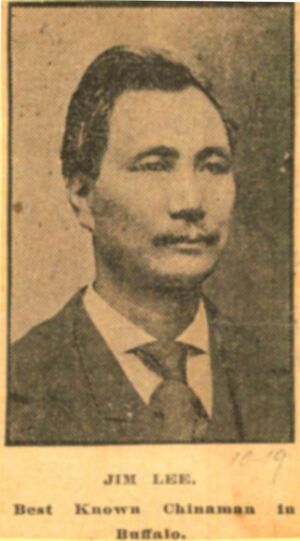 The 1920 Census indicated that Buffalo had 102 Chinese-born residents. A Buffalo Courier news story in 1927 pointed out that, at that time, there were 33 Chinese students enrolled in Buffalo elementary schools. The parents of the children often remained in China, sending them to live with cousins, uncles, or other relatives while receiving their education. The community grew slowly, but by 1930 they had established a Chinese Merchants' Association that served as a social center. Mr. Lee High was respected as the leader of the community. In 1930 he told a Buffalo Times reporter that there were about 30 Chinese men and boys out of work, and he had been trying to find jobs for them. The article also mentioned that Chinese Sunday School classes were being held at the Y.M.C.A.

The Japanese invasion of China that began in 1931 brought the Chinese community of Buffalo together, and they participated in a number of fund-raising drives, parades, and other war-related efforts. A Chinese Benevolent Association was established during this time. The Association was extremely active in World War II bond sale drives.

Chinese Merchants Association: A group of businessmen who met to better their conditions and have social activities.
Japanese invasion of China: Attempt by the Japanese to take over Mainland China,beginning in 1931 and continuing throughout World War II.
Fund-raising Drives: Efforts to raise money for a specific purpose or charity.
Chinese Benevolent Association: Group or club that sponsored social and charity activities.
World War II Bond Sales: Bonds were sold to raise money for the war effort. Those buying the bonds cashed them in at some point in the future, giving the government the use of their money during wartime. 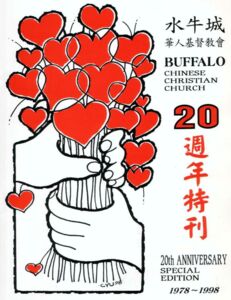 Today, the Chinese Club of Western New York serves 280 families, joining together Mainland Chinese as well as members from Taiwan and Hong Kong. The school teaches both simplified Chinese written language, which is used on the Mainland, as well as the traditional written language, which is taught in Taiwan and Hong Kong. Some of the other activities sponsored by the Chinese Club include a chorus, youth club that includes a youth orchestra, children's dancing school, ballroom dance club, Tai Chi club, performances, workshops on Chinese history and culture, and public events for Mother's Day, Chinese New Year, and a summer picnic.

The Chinese Club of Western New York participates in service projects that benefit the entire community.