Spanish-speaking people have lived in Buffalo, New York since the late 1800s. The 1880 census lists sixteen Buffalo residents who immigrated from Spain; three each from Mexico, South America, and Central America; and four from Cuba. Although the exact year that Spanish immigrants started arriving in Buffalo is not known, national census data reveals that immigration from Spain increased greatly in 1864 and 1865, after the close of the Civil War. Spaniards who came to Buffalo settled in the Lackawanna area. They eventually formed social groups such as Las Amigas Leales and Los Buenos Vecinos, which held weekly meetings at the International Institute of Buffalo. By 1920, 140 Spaniards lived in the City of Buffalo. They organized to form the Spanish American Club in 1924, which sponsored sports and social events for the community.

During the 1950s, significant numbers of Puerto Ricans began arriving in the Buffalo area. A 1953 Courier Express news article stated that at least 1,500 Puerto Ricans had settled in the area. Most of them first arrived as migrant farm laborers during the late 1940s and early 1950s, however, a small number of Puerto Ricans had made their home in Buffalo much earlier. Julio de Castro was one of the first Puerto Ricans to arrive in the city. He worked for the Foster McClellan Company (later known as Foster Milburn) in the early 1900s and eventually became the company's General Manager. He was able to send his son, Julian Edmond, to a prestigious private school. Julian served in the Navy During World War I aboard the warship Arizona, and later became a valued reporter for the Buffalo Evening News.

The number of Puerto Ricans who migrated to the area increased greatly during the 1950's as they escaped the poor socioeconomic conditions of the island. Most of them arrived as migrant labor at first, traveling back and forth from their home on the island to the Buffalo area during growing season. The story of Eugenio Fuentes was typical. He was recruited by a labor boss in Puerto Rico to work on the farms of North Collins, NY around 1953. Once he decided to make his home in the area in the 1960s, he moved his family to the city of Buffalo and got a job with New York Central Railroad. Puerto Ricans also found jobs at Bethlehem Steel, Pillsbury flour mills, and other factories including Ford and Chevy, but many found only menial jobs because of language difficulties and their lack of a good educational background. At first, Puerto Ricans settled on the East Side of the city but when the city began tearing down houses for urban renewal in the 1960s, large numbers of them moved to the Lower West Side.

Prestigious: Describing a reputation based on high achievement, character, wealth or power.
Socioeconomic: Involving factors that are both economic and social.
Labor boss: In this case, someone in Puerto Rico who recruited migrant labor for U.S. farms and businesses.
Menial: Work requiring little skill, usually paying very little.

La Alternativa began in 1984 as a substance abuse prevention program. They also assisted with academic help for Latino students at risk and began some AIDS prevention programs. The great numbers of community organizations that were attempting to provide social services to the Spanish-speaking population created a patchwork quilt of services and forced them to compete for available grant funding. Some early efforts to work together resulted in the Consortium of Spanish-Speaking Community Organizations and the Alliance of Hispanic Organizations. Finally, in 1986, the three largest social service agencies (PRACA, PRCC, and La Alternativa) merged to form the Hispanos Unidos de Búfalo (HUB). HUB is a non-profit agency that serves the residents of Buffalo's West Side as well as the Hispanic community of Buffalo and Erie County. Goals of the organization aim to improve the quality of life for the Hispanic community by advocating for increased employment and affordable housing, providing educational opportunities, improving health care, providing counseling and drug dependency programs, encouraging Hispanic participation in the political and social life of Buffalo, and providing cultural activities. Some of the programs they offer include disabilities assistance, domestic violence services, food pantry, HIV/AIDS and substance abuse intervention, housing aid, and senior citizens and youth services.

The 2000 census showed continued growth in the Hispanic population of Buffalo, with over half of Erie County's 31,054 Hispanics living within the city. The West Side of the city gained more than 500 Hispanic residents between 1990 and 2000. Today, a growing number of newspapers, radio programs, and websites reach out to publicize the contributions of Latinos to the prosperity of the Buffalo area. 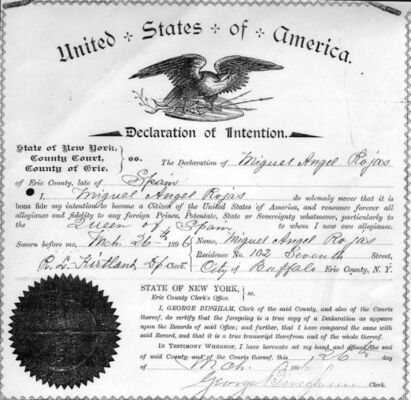 Mexicans continued to arrive in Buffalo in small numbers throughout the early part of the 20th century, and they formed the Junta Patriótica Mexicana to socialize and share their ethnic heritage. In 1947, they formally organized the Central Social Club Mexicano in Lackawanna. The club sponsored social events and celebrated Mexican national holidays. With the construction of its own building, it became a busy center for the community. Women club members also had their own group, the Club Latino Norteamericano de Mujeres.

During the World War II manpower shortage, Mexicans continued to arrive in the area to fill jobs left vacant by men leaving for the service. They worked as braceros to maintain the railroad lines; filled jobs in the steel plant, factories and mills; and also worked as migrant farm labor. Unfortunately, when servicemen came back from the war, many Mexicans lost their jobs. Those who had been brought to Buffalo as migrant labor went back to Mexico, while other Mexicans who had immigrated to Buffalo located to other areas to find work. By 1950, the Mexican community of the greater Buffalo metropolitan area consisted of a population of 203 residents. The economic decline that followed the closing of mills in succeeding years forced many of those residents to migrate to Chicago and other major urban areas. The result was that the Centro Social Club Mexicano became inactive. 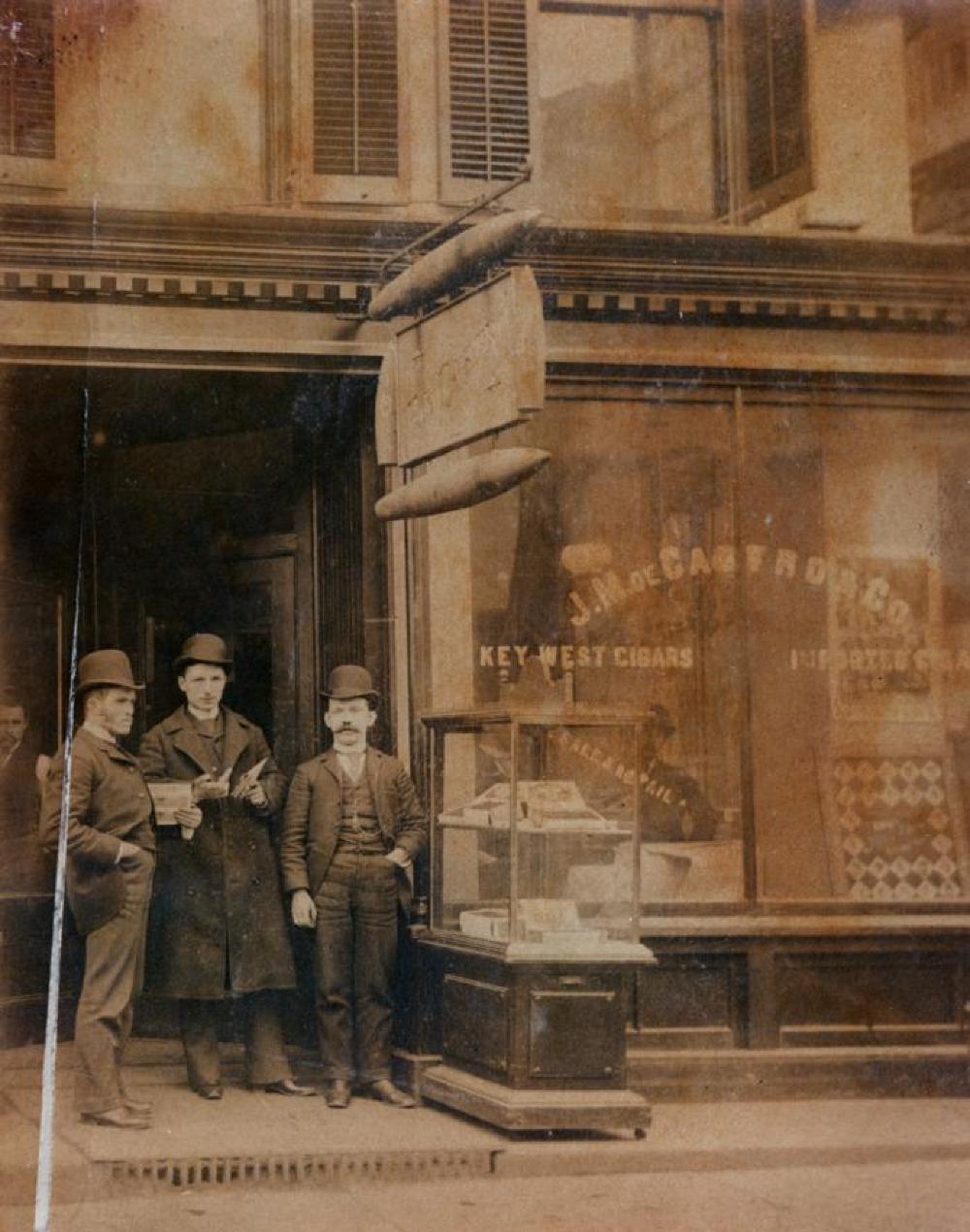 Puerto Ricans had formed the Borinquen Club in the early 1950s, and about 50 members met regularly in the Welcome Hall Community Center. The Unión Puertorriqueño de Ayuda Mutua was also organized in Lackawanna in 1954. Both groups sponsored social activities, offered instruction in English, and helped their community members better understand their rights as citizens. In 1953, Catholic clergy, social agencies, educators and employers met at a conference to discuss the needs of Puerto Ricans in Buffalo. Around that time, the Catholic Diocese formed a Spanish Apostolate to reach out to the growing Latino population. In the 1950s and 1960s, greater numbers of Cubans began arriving in Buffalo and by the time of the 1970 census, there were 131 Cubans in the city. Immigrants from the Dominican Republic and other Central or South American countries also began to arrive during this period.

The Latin American Democratic Club is another Hispanic organization that was formed in the 1950s, on the East Side of the city. In 1967, the group had made arrangements to rent a hall for their annual Hispanic Coronation Dance. Shortly before the event, they were advised that the hall was "permanently booked" and their deposit was returned. This act of discrimination, although hurtful, created a deep sense of determination that led to the building of the Agustin "Pucho" Olivencia Community Center in 1969. The fundraising campaign and surrounding publicity united the Hispanic residents of Buffalo, and the organization advocated for the civil and political rights of the community. The group also published the newspaper La Prensa Hispana and broadcast the radio program Ecos Borincanos. They organize cultural affairs that celebrate Latino heritage, such as the celebration of Three Kings' Day and the annual Grease Pole Festival.

Discrimination: Unfair or intolerant actions towards a group of people, usually based on prejudiced beliefs.

While the Latin American Democratic Club was focusing on political rights and social activities, leaders of the club realized that a direct aid social service organization was also needed. The Puerto Rican American Community Association (PRACA) was organized in the late 1970s as a non-profit organization to apply for grants and provide needed human services to the Latino community. Although the name of the organization specified Puerto Ricans, the organization served the needs of Spanish-speaking people of all nationalities.

The 1970s saw a substantial growth in the number of organizations seeking to address the social service needs of the Latino population of Buffalo. On the campus of the State University of New York at Buffalo, students and administrators formed the Puerto Rican-Chicano Committee (PRCC). The group was designed to respond to the community and address issues of housing, education, employment, criminal justice, and health. The Buffalo Hispanic Association was also formed during this time, but only remained in existence for a few years.During this period, Anna Cotton began the Los Tainos Seniors Center, which offers housing for seniors over 62, meals-on-wheels, and legal services. In 1981, Juan Gonzalez and other artists began El Museo Francisco Oller Y Diego Rivera, which celebrates contemporary art and culture by exhibiting fine art by Latinos, Caribbeans and African-Americans. 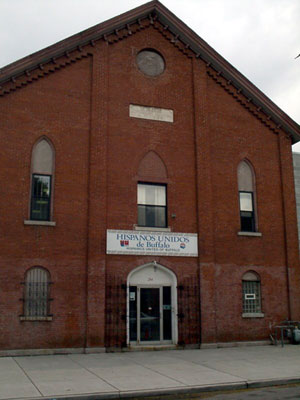