The rhythmic strains of Latino music cascades from doorways as the aroma of pasteles, fajitas, or arepas fills the air. One is likely to hear the rapid, impassioned pattern of Spanish conversation. This is Southwest Yonkers, where a lively mix of Latino cultures is bringing new life to a depressed urban area. The 2000 Census counted 51,852 Hispanic or Latino residents in Yonkers, New York, a growth of nearly 62 percent over 1990 population figures. While the latest Census count reveals that Hispanics are the largest minority population in the city, the number is sure to be a low estimation, because many immigrant newcomers do not return the census questionnaire out of fear, or possibly a misunderstanding of its importance.

History has not recorded the names of the first Latino families who settled in Yonkers, but we know from the 1900 census that a small number had already arrived in the city by the beginning of the century. The listing of two Mexicans, two South Americans, two Spaniards, two Central Americans, and eight Cubans living in Yonkers that year is very likely the first recorded history of Latinos in the city.

Pasteles: A Puerto Rican dish made of a mixture of plantains and spiced pork, wrapped in banana leaves.
Fajitas: A Mexican dish with meat, chicken or fish, seasoned and wrapped in a flour tortilla.
Arepas: A Colombian corn patty, filled with cheese and grilled or fried. 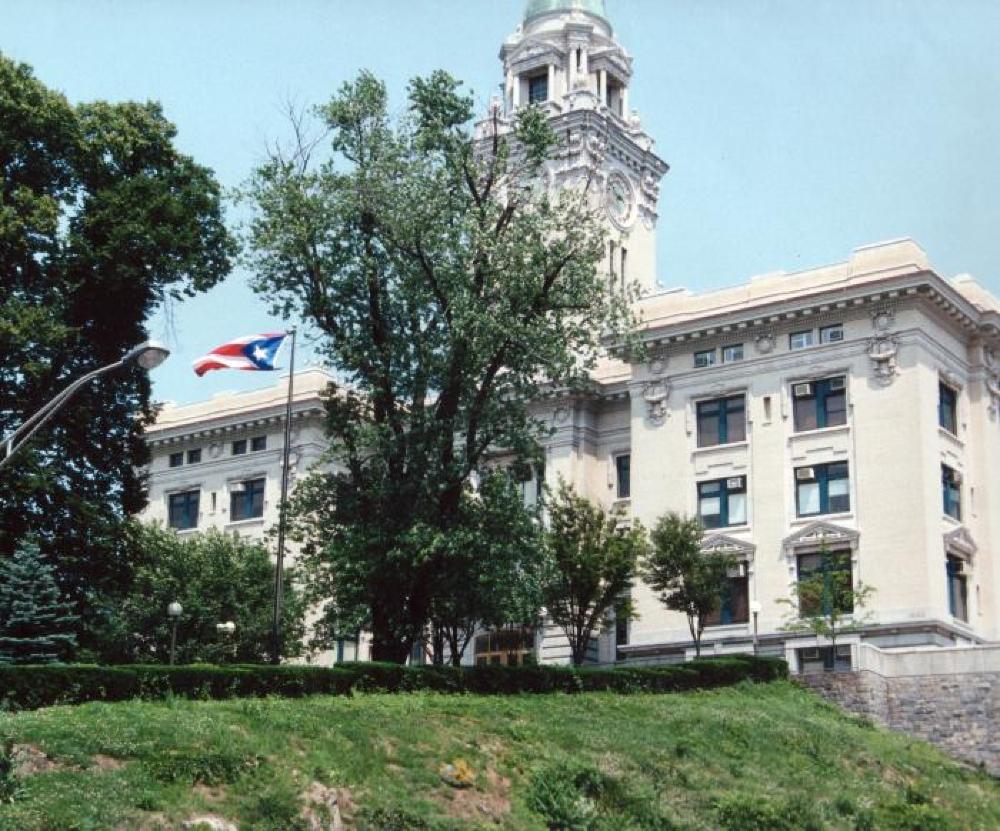 Cubans and Puerto Ricans remained the largest Latino groups in Yonkers throughout the 1960s, but immigration from countries such as Colombia, Ecuador, Costa Rica and the Dominican Republic also began to increase during the turbulent decade.

Colombians began to arrive in Yonkers in the late 1950s. A small group of them met each other while shopping at La Embajada, a local grocery store that carried Colombian food and newspapers. They began the Colombian Community Center in 1978 with 33 founding members. Although some of the older members have since retired to Florida, the group continues to function with social activities, voter registration drives, Colombian Independence Day celebrations on July 20th, and an indoor soccer team.

A wave of immigration from the Dominican Republic occurred after the 1961 assassination of the dictator Rafael Leonidas Trujillo and the civil war in the years that followed. Another surge in immigration from the island occurred in the late 1980s and early 1990s, as depressed sugar prices caused Dominicans to come to the United States for jobs. Many of these recent immigrants arrived illegally, risking their lives to travel in small boats to Puerto Rico, from where they were able to enter the United States. Maria Garcia, a teacher, organized the Yonkers Dominican American Cultural Club in the 1980s. The organization sponsored a ceremony to raise the Dominican flag over Yonkers City Hall on February 27th of each year, and celebrated a Dominican Mother's Day luncheon on the last Sunday in May. 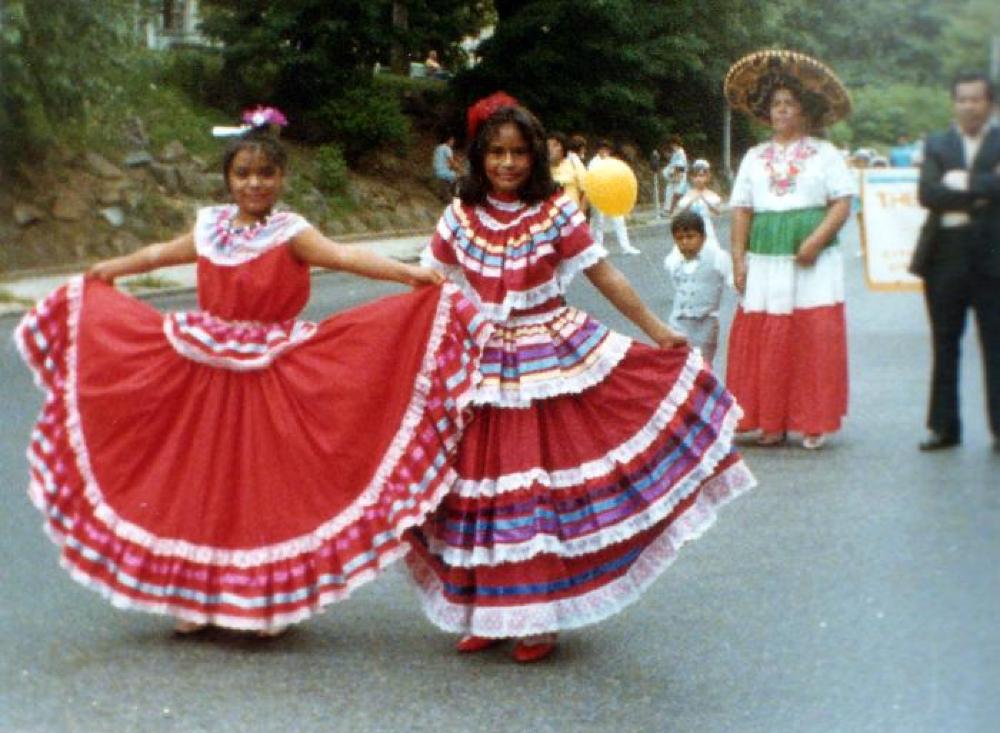 The fastest-growing Latino group in recent years has been the Mexicans. In 1970, only 63 people of Mexican ancestry lived in Yonkers. Twenty years later that number had risen to 2,231, and by the time of the 2000 census, it had grown to 7,294. Most of the Mexicans in Yonkers, like those in New York City and other areas of the state, come from the Puebla area of Mexico. While the 2000 Yonkers Census still listed the Puerto Ricans as the largest Hispanic group at 18,097 residents, the rapid influx Mexicans is changing the face of the city. Mexican stores, restaurants, and bakeries abound in Southwest Yonkers.

Jesus Algular owns Plaza Garibaldi restaurant, and like many Mexican business owners, when he came to the area in 1978 he had next to nothing. He learned the restaurant business by working for others, washing dishes at first. Once he and his brother Pedro had saved enough, they opened a small family-style restaurant in 1990. Jesus continued working another job for income in the business' early years, laboring eighteen hour days to bring the restaurant to the point where it could provide a decent living and expand to a larger location. Others, like Alberto Santos and his partners Diego and Maria Placido, help Mexicans in Yonkers send money to relatives in Mexico through Zsaga-Mex Envios, a money transfer and travel agency which has branches in two other cities besides Yonkers. Dagoberto Espiritu has operated La Pinata Bakery since 1993, which sells desserts and baked goods to the many restaurants in the area as well as to consumers. These business owners helped to found the Mexican Chamber of Commerce in June of 2001, which began with an original fifteen businesses but now has about twice that membership. Jesus Algular served as the first president of the organization, whose goal is to help others establish and run businesses. They work as a liaison between government agencies and those who are establishing a business, and they often bring in guest speakers to instruct on procedures such as the application process for permits and other licenses.

Liaison: One who acts as a contact between parties. 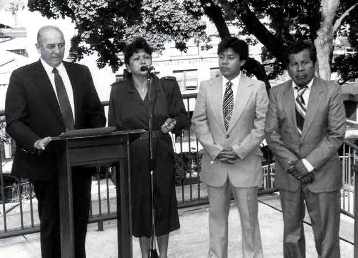 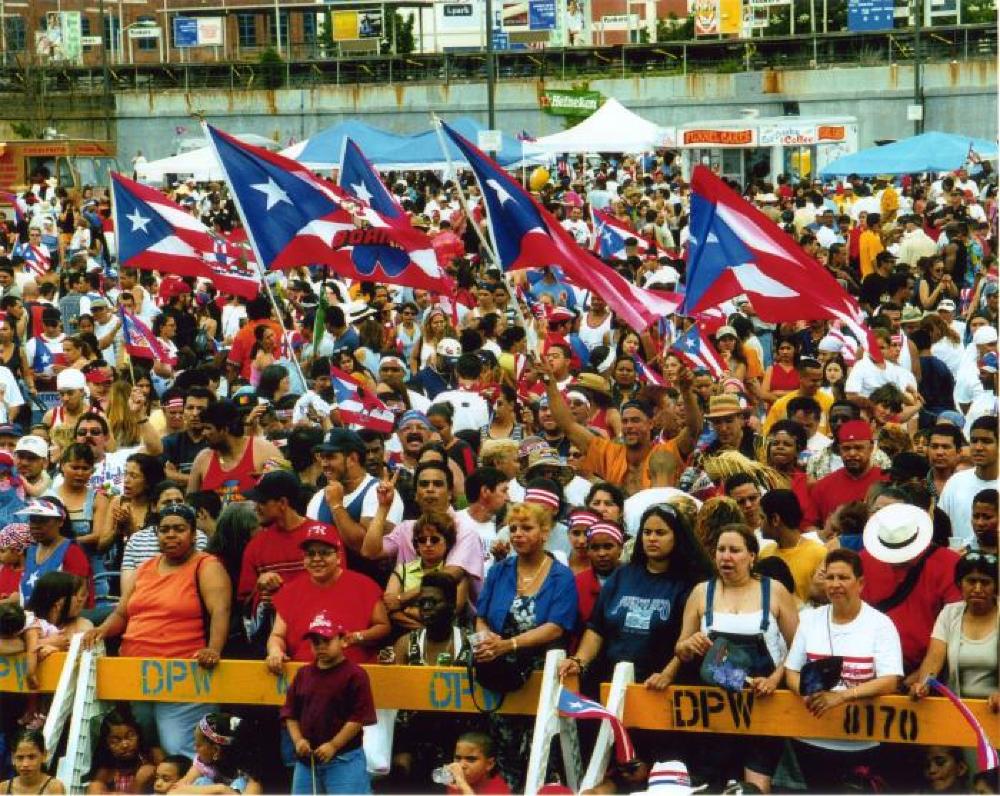 It appears from census records that Cubans were the first Latino group to arrive in sizable numbers. By the time of the 1930 census, there were 116 Cubans residing in Yonkers. They eventually established "La Lojia," a Cuban Community Center. One hundred and one immigrants from Central and South America were also listed in 1930, along with 60 "Other America" residents who were most likely from Puerto Rico.

Large groups of Puerto Ricans first began to arrive during the 1950s, when several families from the island made their home in the city. Early family names of Puerto Rican residents included Gonzalez, Rio, Santiago, Mejia, and Montes, who settled the area and then sent for other relatives to join them. Some of them made their way to the area through migrant work in the fields of upstate New York, and some came directly to Yonkers to work in the "carpet shops" - a row of factories that existed on Saw Mill River Road and Nepperhan Avenue. Others lived in New York City and commuted to work in Yonkers, but many eventually found apartments in the southwest part of the city in order to be closer to their employment. 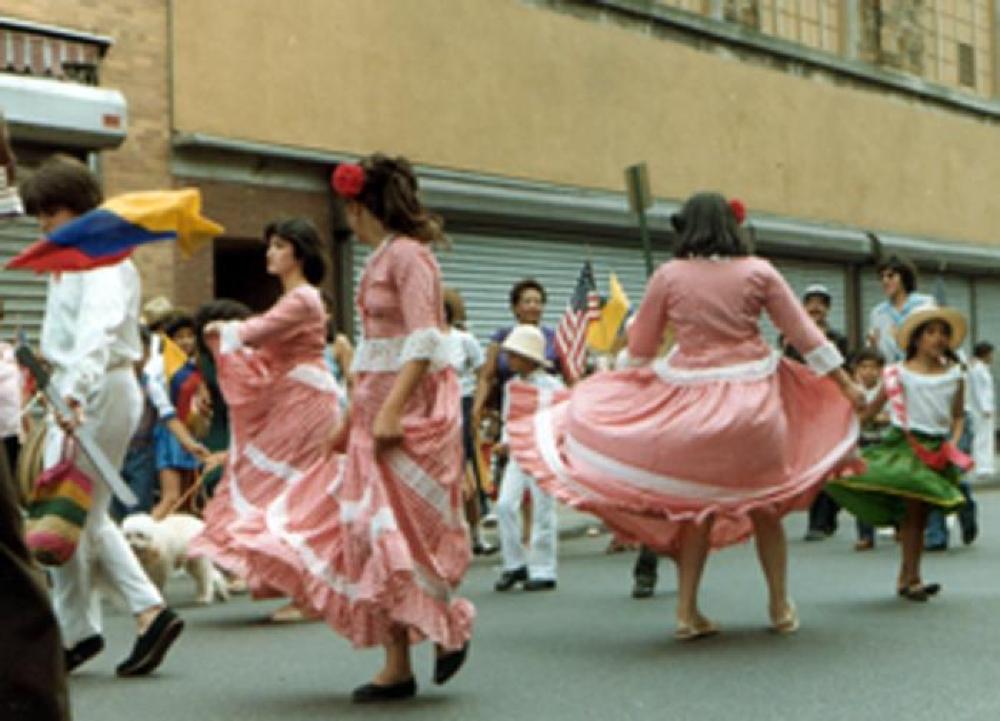 As the numbers of Latinos in Yonkers began to increase in the late 1960s, it became clear that newcomers needed help with language, education, and access to health services. Many Latinos encountered discrimination or misunderstandings in some form, especially in housing and employment. There were various landlord-tenant complaints and reports of some Spanish families being put out on the street.

Father Antonio Sagrista of St. Peter's Church was instrumental in bringing community representatives together to found the Spanish Community Progress Foundation. Originally operating out of a small Riverdale Avenue storefront in the late 1960s, the group was incorporated in 1970 and has since become a vital link to direct social service aid for the Latino community. SCPF provides valuable community services in terms of referrals, housing, employment, welfare, translation services, help with immigration, courts, school system, etc. They also sponsor a Hispanic Senior Citizens Program and reach out to serve Hispanic youngsters through educational tutoring and youth programs.

Another active community group in the 1970s was the Puerto Rican Community Council, which sponsored "Escuela Hogar En Accion" - a free tutoring and counseling program, with recreation and summer lunch programs for the southwest Yonkers neighborhood. The program lost its federal funding in 1973 when Nixon cut the Office of Economic Opportunity programs. The founder of the Council, Carmen Gonzalez, worked with the SCPF to establish the Puerto Rican Parade in the late 1970s. The parade was formally incorporated in 1980 and has become a celebration for all of the Latino ethnic groups in Yonkers. 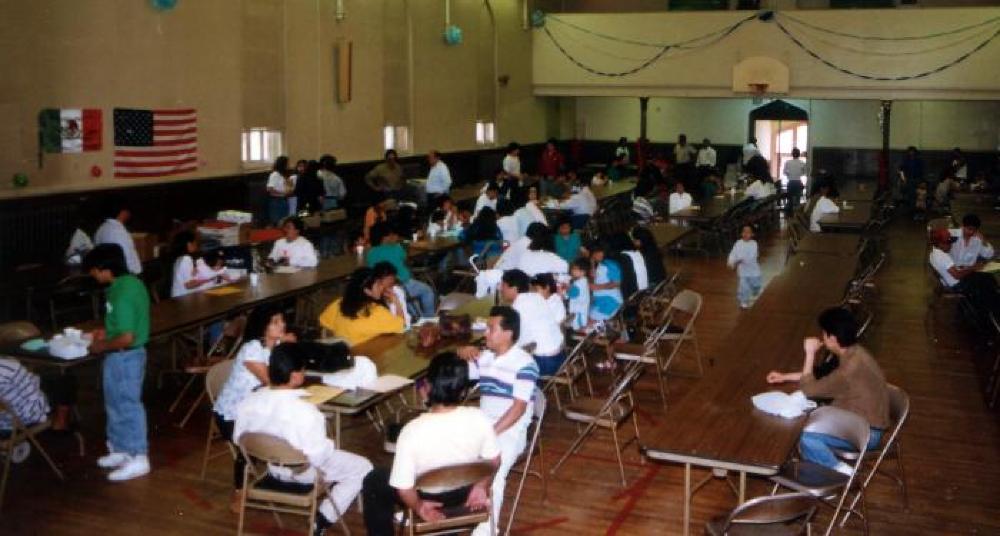 Comunidad Mexicana de Yonkers sponsors many activities, including a flag-raising ceremony over City Hall, Mexican festival, and celebrations for occasions such as Day of the Dead on November 1st and the Soul of Mexico Festival that is held in Untermyer Park annually on Cinco de Mayo. They are a volunteer organization, holding meetings and organizing events as needed, without the benefit of office space or grant funding. Beginning in 1984, the group brought the Mexican Consulate to Yonkers many times to help those without legal papers obtain IDs so that they could cash checks and travel. The group was also instrumental in helping Mexicans who were living in Yonkers, but who had entered the country without documentation, take advantage of the amnesty program in 1985. The federal program gave illegal aliens the opportunity to apply for immigration papers.

The struggles that confront the Mexican community of Yonkers today are similar to that of the Puerto Ricans, and others, before them. The greatest problem is economic, but the situation is worsened by the fact that many in the Mexican American community have not legally immigrated. Employers take advantage of the fact that those without papers are willing to work for minimum wage or less. The burden is added to by the strong responsibility Mexican Americans feel to send money to relatives in Mexico. When both parents are forced to work long hours for low pay, the situation also negatively effects Mexican youth. A high drop-out rate and gang activity is sometimes the result of dire economic conditions.

One of the largest battles the Latino community of Yonkers has waged has been the fight for integration. In 1980, the United States and the Yonkers Branch of the National Association for the Advancement of Colored People (NAACP) filed suit against the Yonkers Board of Education and the City of Yonkers, charging unlawful racial segregation in housing and education that denied equal educational opportunities to Blacks and Hispanics. Minority students were mostly limited to schools in poor physical condition; steered into vocational programs and away from academic high school courses; and assigned in large numbers to special education classes. The result of the lawsuit was a 1986 school desegregation plan that spread minority children throughout the school system, without providing additional bilingual programs for those whose primary language was not English. The Organization of Hispanic Parents of Yonkers and the Puerto Rican Legal Defense and Education Fund, Inc., asked the court for permission to join the lawsuit, but were denied. Instead, the groups were granted amicus status, which allowed them to introduce argument and information in the case regarding the need for bilingual programs and fair access to magnet schools

Yonkers Latinos have long fought for political representation on the City Council, and in 1994 Fernando Fuentes was appointed to the body, becoming the first Latino to hold an elected office in Yonkers. Yonkers Latinos still have much to accomplish in uniting and making their voices heard in the city's politics. In May of 2000, Yonkers Mayor John Spencer replaced the only Hispanic on the Yonkers Board of Education with a non-Hispanic, but Latinos quickly responded by creating a new organization with a political focus. The goals of the Yonkers Hispanic Leadership Council are to promote and support those who wish to enter public service and to involve the community in the electoral process. They sponsor an educational summit and a voter-registration drive.

Integration: Combining groups fairly into the society or school.
Segregation: To separate groups by race or ethnicity.
Vocational: Relating to jobs that do not require college degrees.
Desegregation: System to integrate groups that were separated by race or ethnicity.
Bilingual: Speaking two languages.
Amicus: Meaning "Friend of the Court," a party who may present testimony and evidence in a case but is not a formal participant in the lawsuit.