A critical element in any military force, training was an essential step in transforming American civilians into the gallant “doughboys” we remember today. In addition to teaching basic drill orders and command structure, training typically readied soldiers for military service by putting servicemen through a battery of physical fitness, mental preparedness, and weapons proficiency tasks. While most soldiers joined the ranks as enlisted men, a smaller contingent went to Officer Candidate School (OCS). Upon successful completion of OCS, graduates became commissioned officers of the United States Army.

Americans from many states joined the service, but trainees did not always prepare for war within their home state. Training centers large and small were found in a variety of locations including rural areas, urban districts, and even on college campuses.

During World War I, military training was not limited to soldiers. In 1916, the Military Training Commission was established to comply with a mandate set forth by the Board of Regents, which required that boys between the ages of 16 and 18 receive physical and military training at school. Some teenage boys were also selected to go to specialized summer training camps in preparation for military service. 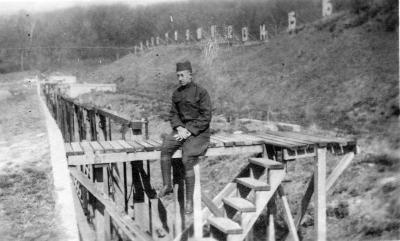 Carl Hapeman at a Rifle Range 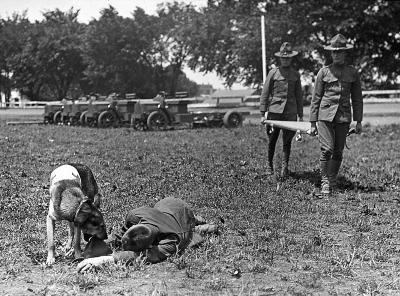 Training a Dog with the Medic Corps